Shows are at the heart of everything we do at Rubber Chicken Theatre. Taking part in live performance and being part of a show 'family' is an experience that most kids (and adults!) get a massive amount from. There is nothing quite like the incredible feeling of performing live on stage and the friendships built in the rehearsal room last a lifetime. We believe in giving everyone the opportunity to perform on stage with professional lighting, sound, musicians, costumes etc - although we audition for principal parts we never hold auditions for our young people to take part in the shows.

'Show in a Week' is our flagship event - we have been running show in a week in Dunblane for 15 years now! With an ever increasing cast of our tiniest chickens through to our adult cast and crew we rehearse, learn and perform an entire musical, complete with full costume, production and beyond. In 15 years we've had everything from life size pirate ships to actual flying cars, Joseph's technicoloured coat to 200 hand painted catsuits, a full scale moving barricade, to the longest march of the Siamese children there has ever been.  'Show in a Week' really is a bit special!

In addition we now offer a 'Show in a Week Senior' specifically for our high schoolers, our annual panto, running for nearly as long as show in a week (with nearly as ancient jokes) a Broadway Jr show in the Spring to coincide with a trip to the Junior Theatre Festival and much more.

To get a flavour of our previous shows have a look here.

Show registrations open regularly throughout the year, often several months in advance. Keep an eye on our social media channels or sign up to our waiting list to stay informed. 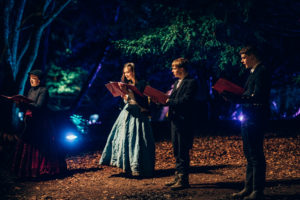